An overview of Leamington Peace Festival

updated June 2011, based on an original script for Radio Wildfire


Leamington Peace Festival is a free weekend event which has been taking place for more than 30 years in the Pump Room Gardens on the bank of the river Leam, right next to the main shopping Parade, between the railway station and the Town Hall. It started in the 1970s with the merger of two earlier festivals devoted to healthy living and averting the Third World War.

Officially the Peace Festival "aims to promote peace and equality between people and nations while living in harmony with the environment" but it's not an easy event to sum up in a phrase, let alone convey how stimulating and inspiring it is in practice, so I'm going to go into more detail here on how it works and why it's more than just another music fest.

Since it's a free festival in the town centre you can walk in or out anytime with no tickets or turnstiles, so it's hard to be sure how many people attend but it's certainly thousands over the weekend closest to the summer solstice, around the middle of June.

There are over 150 stalls of many sorts, including local and international campaign groups, crafts and healthy food outlets, with an emphasis on fair trade and sustainability. No plastic cups or cutlery, no junk foods or booze sales on site, though you can bring your own if you're sensible - normal rules for a public park, basically.

It's not primarily a commercial event but you can buy things like hippy fashions, hammocks, hand-drums, books, costume jewellery, organic veg, and so on, or pay for an Indian head massage or get your aura or chakras checked out, if that's your bag.

All this might sound like a fun cheap diversion for a sunny day, and it is, but if you stopped there you'd be missing the point. The Peace Festival is about practical empowerment, imagining a better world and then doing simple things to get there - not just asking but answering questions, not just talking but taking action, helping and encouraging people to collaborate to live more lightly on the Earth, with less fear and more support and understanding.

And if you think it's pathetically naive to imagine you can ever stop killings and torture round the world by wimpy things like petitions and writing letters, you might talk with the people from Amnesty International who have secured the release of tens of thousands of prisoners of conscience with just that sort of modest collective action.

It is a big scary world and though most of us can see things that desperately need fixing, and should be fixable, it's daunting to imagine we can make a difference alone, while we're pretty busy just looking after ourselves. But the Peace Festival lets you meet other people who feel that way, get support, get started, turn your fears into hope for the future, make a difference.

And that's precious; worth seeking out. As John Lennon put it, "when you dream alone, it's just a dream - but when you dream together it can become reality." 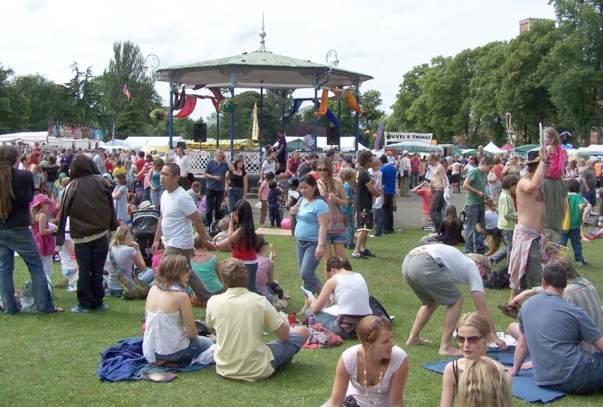 You may need to be there to believe this stuff, so let's turn from the campaigns and stalls to the stages and big tents: dozens of bands and singer-songwriters chosen from hundreds of applicants play through the days, on two stages, and we deliberately never host the same act two years in a row.

It's often the less-known performers who are most inspiring on the day - people like Thomas Truax from New York who builds a kind of mechanical drum machine as he sings and plays, accompanying himself with looped sounds from bits of domestic appliance - or the whimsical happy dancing sound of Kate Goes from Birmingham. And of course there's festival folk and indie pop, but we favour variety and new ideas, and aim to steer clear of dad rock and DJs.

In between the music sets there are peace talks which bring ideas from the campaign stalls to a wider audience. All the musicians on the band stand and marquee stages perform on an expenses-only basis, so the spirit is generous.

The festival is organised by a committee of unpaid volunteers like me who meet monthly through the year. It gets no government funding, though we're glad of moral support from the local authorities. Things like tents and toilets and fire extinguishers, PA hire and professional First Aid are funded by the food stalls and traders chipping in ten per cent of their takings; that way the festival stays independent; there's no event sponsorship; the detailed printed programmes are free, funded by adverts.

There's actually much more than music, peace talks, healthy food, campaigns and ethnic tat; we run free indoor workshops for hands-on tips on everything from starting a campaign to learning to play the didgeridoo, and there's a dance display area, and Simon's pride and joy the Kids' Zone, which provides special things for young people to see and do each day, both outdoors and under cover - storytelling, original drama, Sylvesta the Jester, and interactive art and craft activities like making hats and puppets. Then there's Jan Edgcombe's blackboard van on Sunday; a show created by the kids each day - and even den-making with natural materials, under the trees, at the end of Saturday afternoon (near the library and the river at 4:30pm).

The 2011 Festival starts at around 11am on 18th June, continuing till 9pm, then restarts on Sunday 19th June from 11am till 6pm. There's no camping on site but loads of places to stay in Leamington and Warwick; the Pump Room Gardens are a short walk from Leamington Spa mainline railway station and hardly any further from the Grand Union canal, for those tempted to come by narrowboat and bring their own accommodation...